View all Guides View video tutorials Smart Watch Index
Join our site like 41007 users have and download one of the 11348 Watch Faces!

The new sound of the time
The decimal minute repeater

Hinted with a short sound (ding, ding) and moving left hammer.
Moving parts on the back.
In DIM Sunset Mode, the face behaves like DIM off during the day.
Exact switching between day and night, only in night mode with Color.

With the ZEITWERK MINUTENREPETITION, A. Lange & Söhne is presenting for the first time a model with a striking mechanism that sounds the hours, ten-minute intervals and minutes. The acoustic reproduction corresponds exactly to the digital display. A low tone for every hour completed, a double tone for the completed ten minutes and a high tone for every completed minute. As soon as the striking mechanism is triggered by the repeater at 10 a.m., the left hammer strikes the hours and the right one the minutes. for the double tone of ten minutes, both hammers strike with a slight delay.

With the development of this minute repeater, Lange’s designers broke new horological territory, because all the minute repeaters known to date were integrated into hand watches. At ZEITWERK, however, it was necessary to couple the minute repeater to a digitally displaying clock. The designers not only mastered this challenge, but even found a solution that took advantage of the principle of the jump digit mechanism.
The time to be struck is scanned over three seasons connected to the advertising mechanics. The hours are scanned on the outside of the hour ring, in which the twelve-stage hour scale is integrated. The ten minute scale and the minute scale are also connected to the respective minute disc. They are arranged on two separate axes and have ten or six steps. The arrangement and shape of the three seasons with relatively large scanning areas enables reliable and error-free scanning of the time.

The power for the blow

The pursuit of the perfect sound

In order to achieve the highest sound quality, the designers have consistently optimized the clockwork and housing. The striking mechanism of the ZEITWERK MINUTENREPETITION is triggered by a push button instead of the usual slide. This construction allows the watch to be protected from water up to a pressure of three bar.
Tuning the gongs requires trained hearing and is done exclusively by hand. In the watch, the springs have to sound clear and long-lasting – and harmonize perfectly with each other. Until then, they are removed, processed, reinstalled and tested several times. The pursuit of the perfect sound takes up a large part of the assembly time.

The highest level of craftsmanship

The in-house caliber L043.5, consisting of 771 parts, is finished by hand with the utmost care and effort. 250 pieces more than the 2015 model. Three of the 93 jewels are set in screwed gold chatons. The hand-engraved balance cock – the artful signature of all Lange watches – received a design counterpart in the form of an escape wheel block engraved in the same pattern. 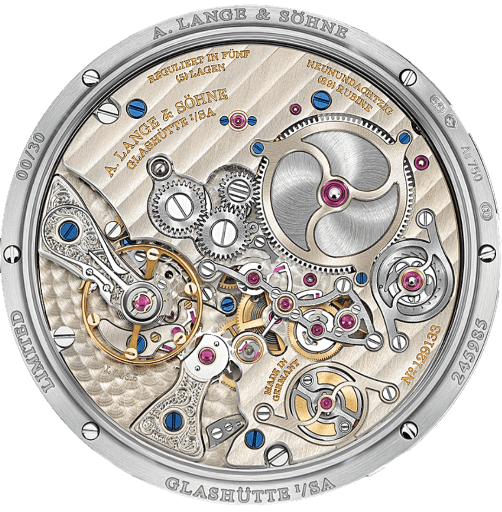