View all Guides View video tutorials Smart Watch Index
Join our site like 41822 users have and download one of the 11601 Watch Faces! 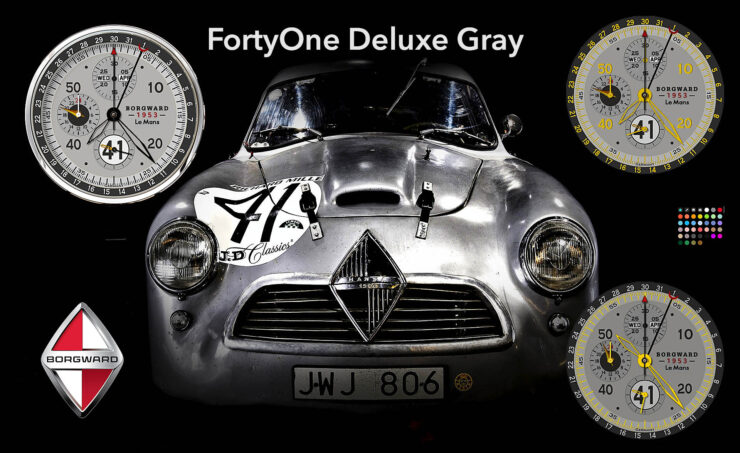 FORTY ONE 1953 LE MANS
“FortyOne” stands for the start number of one of the two Hansa 1500 racing cars from the car manufacturer in Bremen,
who started at the legendary 24-hour race in Le Mans in 1953.

Only one racing car survived the time in Sweden, to start 65 years later, in summer 2018, at the same number 41 on the Le Mans circuit. The manufacturer’s watch edition “FortyOne” pays tribute to this unique racing legend with its collection. All models are limited to 41 copies!

The 41 is the visual focus in the dial design. The two color worlds of the models were created in relation to man and machine (gray stands for the aluminum body of the RS Coupé, beige for the racing suits of the mechanic team).

HISTORY
Carl Friedrich Wilhelm Borgward 1890 – 1963
A MOVEMENT, A GEAR AND A CIGAR BOX
From this, a twelve-year-old boy constructed a toy car – it is the first work of an ingenious designer before writing automotive history. In the meantime, Carl Friedrich Wilhelm Borgward has become a myth. A maker who could do more than it took time. A man who lived for one thing: to design vehicles that were visually and technically brilliant. Carl F. W. Borgward was a genius of the 50s, whose lifeblood and soul continue to have an impact today.
Borgward was a brand name under which passenger and truck vehicles were manufactured in and around Bremen between 1939 and 1963. From 1920 to 1969, Borgward was also part of the name of various companies, some of which existed one after the other and some coexisted.

Borgward Hansa 1500
In March 1949, Borgward presented the car at the 19th Geneva Motor Show. The Hansa 1500 was, above all, the first German limousine to be built in series after the war with a pontoon body and indicators instead of the usual indicators as direction indicators.

In August 1950, Borgward achieved twelve international records with a racing car based on the Hansa 1500 in Montlhéry, France. The car was designed by the engineering firm INKA (engineering and construction team) consisting of a group of former Auto Union technicians and engineers around August Momberger. Momberger built an aerodynamic streamlined fairing made of aluminum and Karl-Ludwig Brandt increased the engine power to 66 HP. The so-called INKA car was driven by August Momberger, Adolf Brudes, Heinz Meier and Karl-Heinz Schäufele.

The four-cylinder in-line engine of the Hansa 1500 had an output of 48 hp (35 kW) at 4000 rpm at the start of production.
With a bore of 72 mm and a stroke of 92 mm, the displacement was 1498 cm³. The hanging valves were operated by a side camshaft via bumpers and rocker arms (OHV valve control).

The Hansa 1500 initially had a four-speed transmission with middle gearshift (also called “stick shift”) and from the end of 1950 a steering wheel shift. The rear wheels were driven by a cardan shaft.

The wheels of the Hansa 1500 are individually suspended: at the front on upper wishbones and lower transverse leaf spring, at the rear on a pendulum axle with transverse leaf spring guided by a handlebar. The lever shock absorbers of the first series were replaced by telescopic shock absorbers at the end of 1950. The footbrake acts hydraulically on all four wheels, the handbrake mechanically on the rear wheels.

Racing car from Borgward
From 1950 to 1958 Borgward took part in international motorsport, starting with record drives in Montlhéry. The initiator of this engagement was the racing driver and former engineer and factory sports director of Auto Union, August Momberger (1905-1969), who had settled in Hude (Oldenburg) after the war and there together with Martin Fleischer, who later became chief engineer of Goliath, and others Engineers from Auto Union operated a design office under the name INKA (engineering and design team). The first connection between Borgward and Momberger was the order to develop the two-stroke engine for the Lloyd LP 300.

Carl FW Borgward, who wanted to build sports racing cars even before the war, shied away from the high costs of motorsport at the beginning of the reconstruction until August Momberger enthused him to build a record car with the 66 hp two-carburettor engine of the sports convertible on the chassis of the Borgward Hansa 1500 to let. Momberger placed an open, streamlined body on the central tubular frame of the Hansa, which was similar to the pre-war racing car built by Wanderer for the long-distance Liège – Rome – Liège route. The body was manufactured by Rudy in Delmenhorst.

The journeys of the Borgward Hansa 1500 type Inka in Montlhéry started on August 18, 1950 and ended with twelve records in the class F up to 1.5 liter displacement; including 172 km / h over 1000 miles. The drivers were August Momberger, Adolf Brudes, Heinz Meier and Karl-Heinz Schäufele.

The success in Montlhéry was decisive for Borgward taking part in sports car races. For the 1952 season, employees of the INKA group (Momberger had moved to Goliath) developed the Borgward RS racing sports car with a ladder frame and De Dion rear axle. The engine initially produced 80 hp, which could be increased to 102 hp by the beginning of 1953.

At the 1000 km race on the Nürburgring, Karl-Günther Bechem / Theo Helfrich / Adolf Brudes on Borgward Hansa 1500 RS took third place in the overall classification behind Alberto Ascari / Giuseppe Farina on Ferrari 375 MM Vignale and Ian Stewart / Roy Salvadori on Jaguar C- Type. In the same year, Borgward started with two racing coupes with an aluminum body at the 24 Hours of Le Mans. The highlight of the 1953 season was for Borgward to be part of the Carrera Panamericana rally, but Brudes had a serious accident with his RS and Hans-Hugo Hartmann was disqualified as the leader in the light sports car class because he missed the set time in the last stage had exceeded seven seconds. This disqualification because of a little thing brought Borgward a big echo in the press.

Despite the constant further development of racing cars and especially the engines, successes steadily declined over the years, so that in mid-1958 Borgward decided not to take part in racing, although the cars had an upward trend in 1957/58 with drivers like Hans Herrmann and Joakim Bonnier had shown. Above all, however, the costs caused by racing were too high and the advertising effectiveness for a manufacturer that did not offer sports cars was very low.

The RS engine was further developed even after Borgward’s retirement from motorsport and used for Formula 2, among other things, in the Cooper chassis. In 1963 and 1964, the private German team Borgward-Kuhnke-Lotus registered two Lotus 18s that were equipped with the Borgward engine for several Formula 1 races. At that time the engine was already out of date; the team only reached individual crossings.

Borgward watch manufacturer
Jürgen Betz is the owner and producer of the watch brand BORGWARD. He transfers the passion and fascination of the Borgward epoch and the historical clocks that resulted from it to his watch lines. After training as a technician and a stopover in the jewelry industry, he found his way into the watch industry. He got an overview of the manufacture of wristwatches for industry and deepened his knowledge as technical manager in Germany’s oldest dial factory. Here, the creative maker showed that the dial as the face of the watch significantly influences the overall appearance – just as the graceful design of a vehicle awakens the driver’s passion. In 2003 Jürgen Betz got the decisive initial spark to face this challenge. He found the original BORGWARD steel printing clichés from the 1950s in the archive.

Every watch from the BORGWARD Zeitmanufaktur is an expression of individuality, durability and precise craftsmanship. Inspired by the attention to detail of the BORGWARD models, unique watches are handcrafted in Efringen-Kirchen, near the borders with Switzerland and France, and in Bremen’s Neustadt. Every watch bears the “Legend BORGWARD”. As the production manager of a dial factory, the trained mechanical engineer and creative head of the Borgward Zeitmanufaktur, Jürgen Betz, discovered original BORGWARD printing clichés from the 1950s in the archive – the foundation stone for the BORGWARD Zeitmanufaktur was laid. “I found it exciting to take up this part of Bremen’s history again,” said Jürgen Betz.
The “face”, as the designer and managing director of Borgward Zeitmanufaktur aptly titled the dials, is designed by himself with a love of technology and a keen sense for detail. These small series are handcrafted for hours using old printing techniques and special machines in the manufactory. Completed by refining the movements with the finest cuts and pearls, which are also a top priority in-house, a BORGWARD timepiece is unmistakable. Every series is limited. 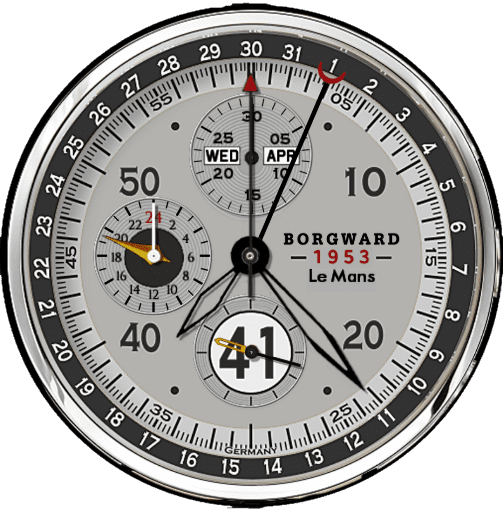 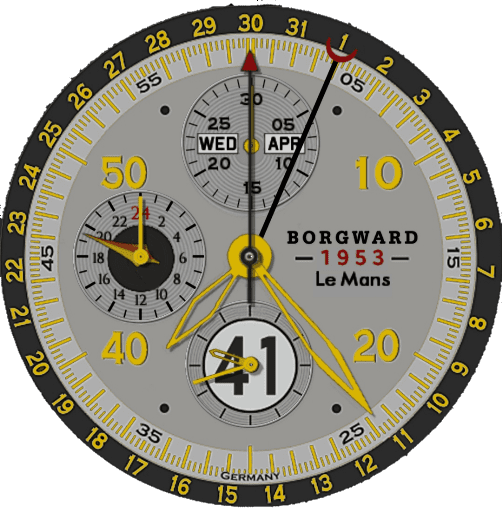