View all Guides View video tutorials Smart Watch Index
Join our site like 40963 users have and download one of the 11325 Watch Faces! 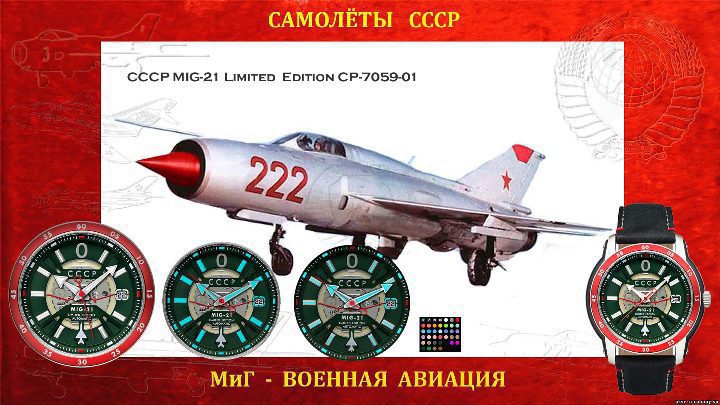 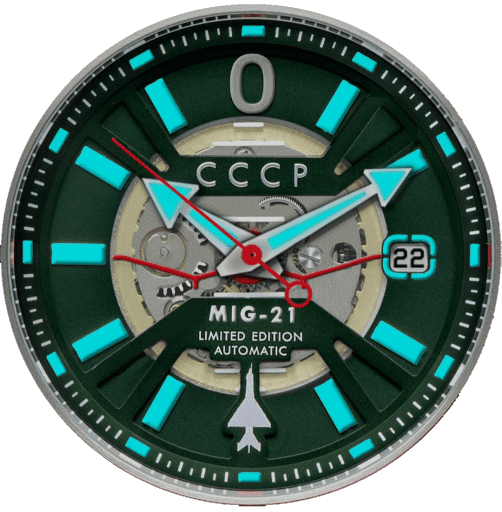 A bold military-inspired round case is met with an aluminum chapter ring. The Mig-21 silhouette is visible on the 6 o’clock position with a striking hour and minute hands sweeping across the Slava movement powered watch visible through the dial. Housed with a model Mig-21 – the watch is a unique Limited Edition of 300 pieces.

ABOUT CCCP
Our watch collection takes its inspiration from the Soviet Era of Russian history.
Союз Советских Социалистических Республик.
Phonetically transliterated to :
Soyuz Sovetskikh Sotsialisticheskikh Respublik (SSSR)
Translated into:
Union of the Soviet Socialist Republics – (USSR) or commonly referred to as the Soviet Union.
What is sometimes forgotten in the history books is that it was the Soviet Union that put the first object in Space. It was the Soviet Union that put the first man and woman in space.
Indeed it is true that the Soviet Era can be remembered for a lot of things including the prodigious industry – including that of its watchmaking.
Russian watches and indeed Soviet-era watches have always been regarded as truly independent and self-sufficient capable of manufacturing.
This autonomous industry of watches produced millions of watches across various factories. Each watch bore witness to the history of its own and in some cases, it again should be remembered that it was Russian watches and not Swiss watches that were the first to be sent into space.

From dive watches to dress watches, each timepiece has a unique design language that is uniquely Russian. We have remained true to this code of aesthetics and have taken inspiration from the many chapters of Soviet history covering the Arts, Sciences, Architecture, and the Military.
The skill artistry and appreciation of Russian watchmaking continue today. The CCCP line serves to be inspired by the long history and legacy of horology as practiced in Russia.

SLAVA WATCH FACTORY
The 2nd Moscow Watch Factory is the home of SLAVA – Glory watches and clocks. The factory started as the “State Trust for Precision Mechanics – Gostrest Tochmek in 1924 and in 1930 became the 2nd Moscow Watch Factory. During the 1930s the factory developed wristwatches, alarm, wall and car clocks, pocket watches, and chess clocks.

At the beginning of World War 2, the factory was evacuated to Chistopol and concentrated its production on the war effort. This not only included watches for military staff but also, timers and fuses for missiles and other technical military apparatus. As the factory was key to the military, control briefly passed to the Ministry of Armaments.

Following the war, the factory produced watches under the names of Victory and Salute. By the 1950s, the name Slava had been adopted. The factory also briefly produced watches under the name START. As well as producing wristwatches, the factory was also prolific in producing clocks, mainly alarm clocks and wall clocks. Both watches and clocks from the factory were exported abroad, not only to the Warsaw Pact countries but also to western countries such as the United
Kingdom, France and Germany. One of the strongest links to the west was the production of Slava watches for the British Company Sekonda. This relationship lasted from the 1960s until the collapse of the USSR.

The old factory building in Moscow has recently been demolished but the Slava company continues to be remembered for its contribution to the epic, legacy of skill and dedication of the watchmakers of the Soviet Union.

Development MIG-21:
The design, construction, testing, and refinement of the MiG-21 was led by A.G. Brunov, initially having the status of deputy chief designer. Since March 1957, according to the order of the Minister of Aviation Industry of the USSR P.V. Dementyev, Anatoly Brunov was appointed chief designer for fighter aircraft; In this capacity, he further led the development of the MiG-21 and its modifications.

When designing an aircraft, it was envisaged that the era of close maneuvering battles was becoming a thing of the past, and the main type of aerial combat would be the approach of aircraft at great speed and the destruction of a target from the first volley of missiles or cannons. According to the same concept, the aircraft of the probable enemy were also created – the F-104 of the American company Lockheed and the French Mirage-3C.

The first in a family of MiG-21 type aircraft was to become an E-1 with a swept wing, but its development was discontinued due to the low characteristics of the AM-5 engine. The first prototype was the E-2 aircraft, equipped with an AM-9B turbojet engine, with an arrow-shaped (along the leading edge 57 °) wing, which in principle did not differ much from the MiG-19. But there was only one engine and a round nose air intake with a central adjustable cone on the plane, moving which it was possible to regulate the amount of air entering the engine.

The construction of the experimental machine was completed in December 1954 and the E-2 was sent to the LII, where on February 14, 1955, its first flight took place. The prototype aircraft reached a speed of 1700 km / h, and an unpleasant feature of the large sweep wing was discovered – at high angles of attack, the aircraft spontaneously lifted its nose until the wing completely lost its bearing properties and fell into a tailspin. To prevent this phenomenon, large aerodynamic ridges were installed on the wing, which prevents the flow of air from the root to the tips. Also, a more powerful engine was put on the plane, as a result of which the speed increased to 1900 km / h. Nevertheless, the design bureau was working on a prototype with a triangular wing under the designation E-4. The new wing retained a sweep of 57 ° along the leading edge and provided the machine with good maneuverability. The fuselage and tail were similar to the E-2. The first flight of the E-2A took place on February 17, 1956.