View all Guides View video tutorials Smart Watch Index
Join our site like 36102 users have and download one of the 10782 Watch Faces! 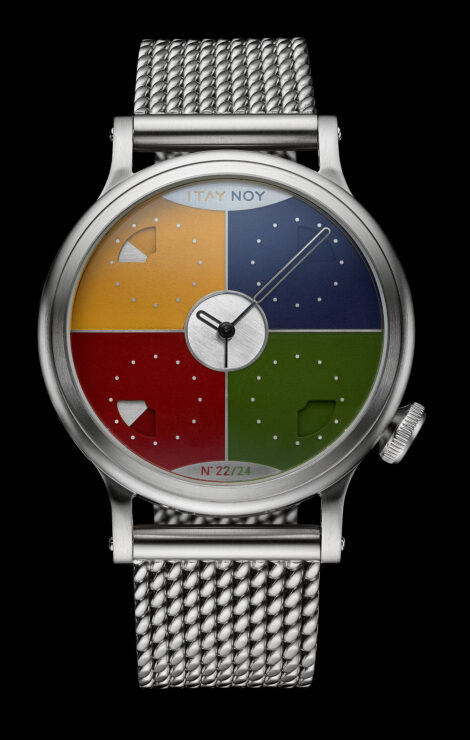 The fourth dial option is by far the boldest in images, and flips the color-based central design concept on its head. Here, the main dial is split between sectors in bright, toy like yellow, blue, green, and red, with the central hours ring instead rendered in exposed brushed metal. To stand out against this colorful harlequin backdrop, the handset is split between black and polished segments, while the four display windows reverse the color-filling concept in favor of gradually exposing brushed metal segments.

The watch has no lume at all, so the dim is just fabricated. However after spending way to long on it, I’m quite happy how it came out.

Itay Noy is an Israeli watchmaker, designer and artist who creates limited-edition timepieces in his independent studio in the Old Jaffa. His timepieces combine craftsmanship with thought-provoking design, meant to induce philosophical perspectives on the concept of time.

Watches in the Time Quarters series have faces divided into four quarters. Each quarter contains a time display comprised of twelve dots to represent the hours. One-quarter of each time display is a window that reveals three hours – one quarter – of the twelve-hour clock cycle. As the time flows between the four-time displays, the windows show the hour. The windows are gradually exposed and concealed as one-hour moves to the next. A traditional analog clock is positioned in the center of the watch

Try opening the watch in App and using the Time Machine. Apart from looking rather cool, it may give you a better idea of how the movement works

Hopefully someone somewhere may enjoy 😁