View all Guides View video tutorials Smart Watch Index
Join our site like 41051 users have and download one of the 11364 Watch Faces! 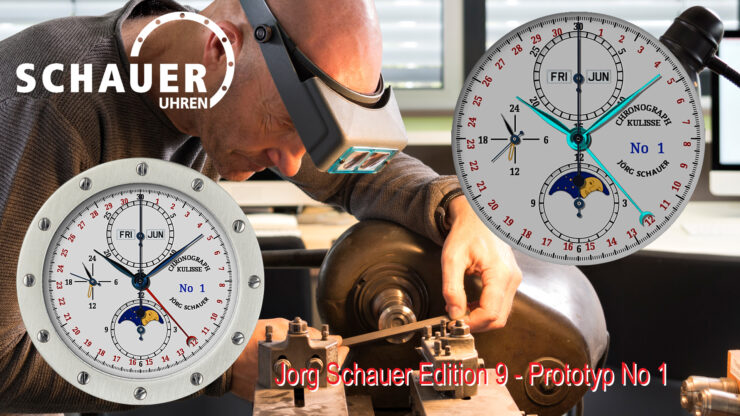 According to my recently published STOWA Flieger Klassik Chrono a face from the owner of STOWA Jörg Schauer. This prototype No 1 was made in silver.
In 2020 Jörg Schauer is now celebrating his 30th anniversary with two special limited watches. A chronograph and a one-hand watch, both true Schauer classics.
Faces in progress, coming soon.

Face partially reworked in photoshop, coded in Watchmaker. New Sunset DIM mode instead of DIM Auto, automatic switching in uColor after sunset and back.
Have fun with this beauty.

“We owe all progress to those who don’t adapt.” *

Jörg Schauer has been designing and building his distinctive watches since 1990. Schauer prefers stainless steel for the cases, the highest quality mechanical movements and designs the watches in a clear and unmistakable design language. The twelve screwed bezel has become his trademark. The technical screw connections of all hand-ground Schauer housings are part of the program. Among other things, they enable to put every watch back perfectly new after years. Perfect surfaces, precision and a design reduced to the essentials have made Schauer watches real collector’s items for 30 years now. Many editions have been sold out for years and are sought after by collectors worldwide. Due to the strong growth of the STOWA brand in recent years (Schauer bought the brand in 1996), he built very few of his unusual watches. The own claim to the best quality and perfect surfaces, which require absolutely concentrated work, were not compatible with the growth. He simply lacked the time and calm. Jörg Schauer now wants to invest more time in his brand and the special watches in 2020, the year of his 30th anniversary.
* (Martin Kessel. Writer, 1901-1990)

30 years of passionate watchmaking.
In 1990 Jörg Schauer decided to start his own business at the age of 22. As a trained goldsmith and specialist in handmade watch cases, he quickly earned a very good reputation in the global collector scene. Over 400 high-quality watch cases and unique watches were created in the first years before he brought all of his experience into his own collection. Since then, many special watches have been created, often limited and / or with special displays (e.g. the mechanical series Digital 1 to Digital 3). Or the QUARADA chronograph with the Valjoux 7753 chronowerk. Back then, in 2000, a real specialty: uncompromisingly implemented, square and waterproof. Schauer is currently still building the model, but with a delivery time of around 6-12 months. In the meantime, this watch has also become a real shower classic. Models such as the typical Chronograph Kulisse Edition 10 or the Kleine Schauer should finally be available again in limited numbers for global collectors. Schauer’s demands on his watches are high. True to his motto: “First and foremost, I build every watch for myself, because of course I would like to have something new, innovative and unusual from time to time.”
He is only interested in concepts that have really been implemented. The pure idea is of no value to him if it is not implemented. Jörg Schauer accepts and respects that this is often exhausting and not every model has become a classic in the past 30 years. For him, it is part of his philosophy, which he lives every day: to continue designing, building, testing, sometimes failing with an idea and thereby undergoing a permanent creative, thinking and learning process. In 2020 Jörg Schauer is now celebrating his 30th anniversary with two special limited watches. A chronograph and a one-hand watch, both true Schauer classics. (Coming soon as a face).

Awards.
When Schauer took third place in Japan in 2004 with his Digital 2 o’clock, he was particularly pleased. An independent jury of experts chose a previously unknown nobody. Other awards: 1st place at the Goldene Unruh in 2000 for Kleine Schauer and in 2002 for Edition 9, 3rd place in 2011 for Edition 10 Silber.

Conversion to manual winding. Individuality.
For some years now, Schauer and STOWA have been offering the conversion of the Valjoux 7753 automatic chronograph caliber to manual winding. For this purpose, a chrono bridge is elaborately made at STOWA and engraved individually if desired. This makes the movement unique and underscores its independence. The possibilities that arise when individualizing a manual wind-up bridge are many. Many personal engravings are possible.